In 2009, a cadre of plaintiff attorneys led by Michael Hosfield sued the NCAA on antitrust grounds on behalf of former UCLA basketball player Ed O’Bannon and a class yet to be determined.

Hausfeld had represented the Alaskan Natives against Texaco after the Exxon Valdez oil spill. He represented a class of Holocaust victims against a Swiss bank that kept their money for the Nazis who stole it. Clashing with him will require a visionary NCAA leader who is capable of imagination, flexibility, and a willingness to push NCAA membership to make meaningful changes lest a wave of common sense make the NCAA laugh from many courts and enter organizational purgatory.

Instead, the NCAA hired Mark Emmert.

In November 2010, Emmett took over as chair of the governing body for college sports after serving as CEO at the University of Washington and LSU. The NCAA announced Tuesday that sometime between now and June 2023, Emmert will leave office after presiding over the near-total dismantling of the organization and its indisputable authority. Whether this will happen with him or without him is a completely legitimate question. The world changed. The NCAA chassis isn’t designed to adapt quickly — with anything.

But Emmert cashed the (extremely large) checks. Even wearing failure.

In a way, that was the point. Emmert was well paid — as much as $2.9 million a year — to serve as a heat shield for a group of university presidents who were either too greedy, too fearful or too uninterested in adapting to the changing landscape and adjusting the organization accordingly. At times, Emmert’s 12-year tenure felt like an 11-year period when the old WWF appointed Canadian promoter Jack Tony as the “chairman” of the organization. On TV, Tony seemed very formal, and made statements about all the major (fictional) events that affected the organization. At the age of 9 I didn’t understand that Vince McMahon was really responsible, so I yelled at the screen if Tony made a decision that negatively affects the Hulk Hogan or Junkyard Dog or any of my favorite wrestlers. Especially in the last years of his tenure, Emmett felt this kind of saurian. CEOs in Georgetown, Wisconsin, Georgia, or Oregon were making — or not making — the decisions. Emmett felt as if he was just there for us all to shout.

Emmett tried to wield power at first. In fact, one of his first major acts indicated that he was well aware of the iceberg that awaited him. Less than a year into his tenure, Emmett held a retreat that included several university CEOs. During this decline, Emmert pushed the idea that schools should be allowed to provide up to a $2,000 annual stipend as part of their sports scholarships to help those scholarships get closer to the actual cost of the attendance figure that schools submitted to the federal government each year. He also supported the idea of ​​then-SEC Commissioner Mike Slave to allow schools to offer four-year athletic scholarships instead of one-year renewable scholarships.

“There is a strong appetite … to find ways that allow us to be more resilient,” Emmert told ESPN in 2011. “All of our one-size-fits-all rules don’t really work when you have different schools like a small liberal arts college and a big public university.”

Except the appetite apparently wasn’t that strong. Several leaders, most notably Boise State President Bob Kostra, expressed their disapproval of the plan. It did not survive the overtaking vote, and only one small step forward was slowed. He showed promise that Emmert saw a potential problem and worked toward a potential solution, but not being able to score even that tiny gesture across the goal line was a political failure that foreshadowed what was to come. Rather than build consensus, Emmert has allowed some myopic people to cause the NCAA to dig in their wake further into schools’ efforts to keep money out of athletes even as they spend more each day in coaching salaries, athletic director salaries, and questionable necessary facility improvements.

Emmert attempted to seize control of the public in 2012 when he and his executive select committee faced penalties against the state of Pennsylvania over the Jerry Sandusky scandal. But Emmert didn’t think many things: The NCAA had no authority to sanction the school’s football program for something that was clearly a criminal matter, and departing from normal enforcement procedures to issue such a sanction would sow distrust of the school leaders NCAA rules.

The NCAA retracted the sanctions two years later, a few months before Emmett’s accountant and Oregon State President Ed Ray—the chair of the Executive Committee—revealed in his testimony that he had not bothered to read Freeh’s report, which was the basis of the sentence before the sentence was issued.

By the time these sanctions were rescinded in September 2014, Emmert had already lost Waterloo. This was stated on June 19, 2014 in a federal court in Oakland, California. On that day, Emmert took the stand in O’Bannon v. NCAA case. The most damning part of his testimony did not come in an answer to a question from Hausfeld or any of his team members. Instead, Emmert fell into the trap set by the plaintiffs’ lawyers. During his cross-examination of Emmert, attorney Bill Isaacson focused on the concept of amateur as defined in the NCAA Handbook.

“Student-athletes should be amateurs in an intercollegiate sport, and their Participation must be motivated primarily by education and physical, Mental and social benefits to be derived. Student participation in universities Athletics is a profession, and student athletes must be protected from exploitation by professional and commercial organizations. “

Soon after, Judge Claudia Wilken Isaacson interrupted and began asking Emmett her own questions. This was a bench trial, so Wilkin – not a jury – was the verdict. The word “exploitation” in this context clearly struck a chord with Wilkin. This exchange led to:

Wilkin: What do you mean that student-athletes should be protected?

Wilkin: Do you consider that to be an exploitation of them? Or is it just something you don’t do You want?

Following this exchange, plaintiffs’ attorneys followed by showing everyone a series of photos in the courtroom showing college athletes either wearing or standing in front of company logos. One photo showed the entire Kansas State soccer team running across the Buffalo Wild Wings logo. The message was clear. Emmert’s schools and NCAA were happy to promote collegiate athletes to commercial products as long as the schools or NCAA got the money rather than the athletes themselves. 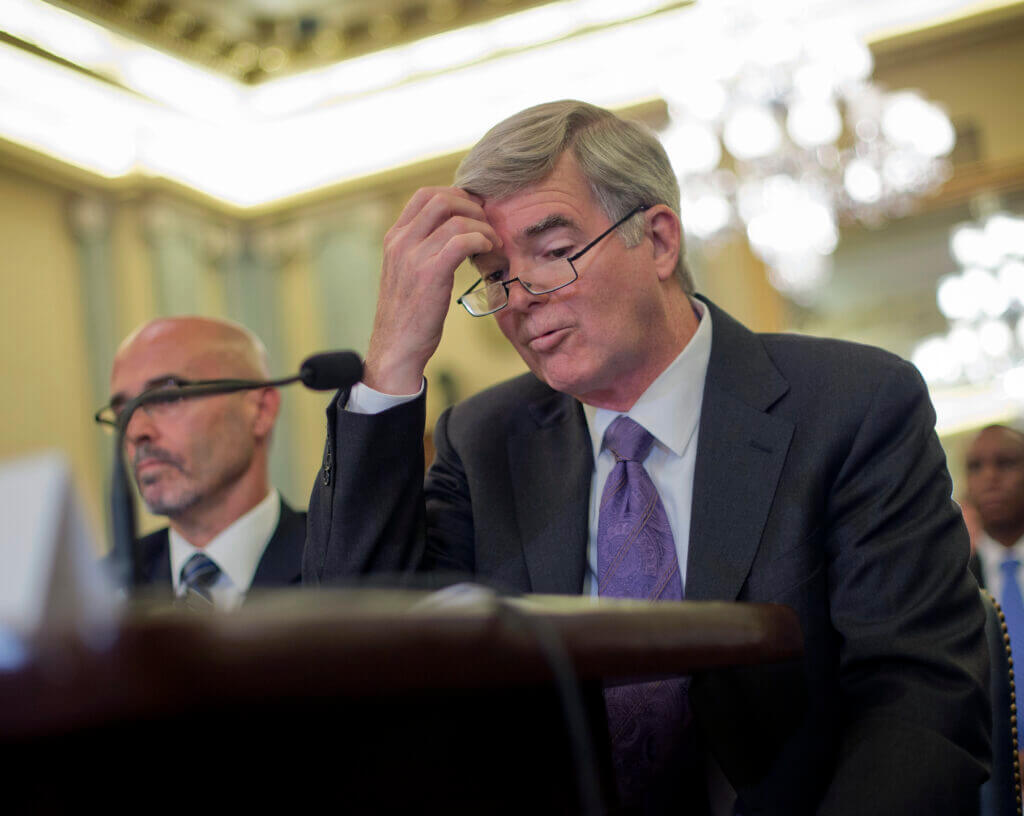 The NCAA should have offered stability in that humiliating moment. Emmert should have pushed school leaders to understand that people who had not been indoctrinated by decades of NCAA propaganda could properly see through every flimsy argument that NCAA lawyers had in their (small) toolbox. This included federal judges. Before he flew home from Auckland, Emmert should have been on the phone with his executive committee with a message: “We’ve screwed up. We need to start giving athletes more now or else our entire organizational structure will be wiped out.”

He should have known this in particular because when he walked out of the courtroom the day before, the Terminator Sports Code copy had entered. After the Wednesday portion of the trial was a hearing for other antitrust cases against the NCAA. The plaintiffs in one case were represented by Jeffrey Kessler, who years earlier had helped bring in free agency in the NFL. Just as in this case, the sport’s governing body was claiming that giving more athletes would ruin the business. Kessler had watched the NFL grow and develop after losing the McNeill v. NFL case. He had no doubts that a system that gave college athletes more wouldn’t mean the end of college sports.

Why did he know this? Because the governing bodies – whether it’s Major League Baseball, the NFL, or the NBA – have always said this, and they have always been proven deeply wrong. Emmett was wise to remind his constituents of this. But either because they refused to budge, because he refused to budge, or because Emmett lacked the political resources or strength of character to convince them they needed to try to negotiate, the school leaders who made NCAA decisions dug in their heels and tried to do so. He encountered Kessler in his home grounds.

We know how that turns out. This case, Alston v. NCAA, ended in a 9-0 NCAA loss in the U.S. Supreme Court. Although the ruling dealt only with the highly focused issue before the court – NCAA rules placing limits on “educational” expenditures for athletes – the majority’s less robust – but still powerful – decision was the majority’s decision, and Justice Brett Kavanaugh’s approval was clear: All NCAA rules for antitrust auditing, and any rule challenged in the federal court system were at risk of being declared illegal.

At the same time as the Alston affair nudged toward its lopsided conclusion, Emmert’s NCAA managed to do something that seemed impossible: It united politicians on both the left and the right in one of the most divided times in our nation’s history. Blue states – citing workers’ rights – and red states – citing free markets – have passed laws that made NCAA rules against players who make money from their rights to name, image, and likeness illegal. This was a classic case of pig fattening and pig slaughter. Schools were so unwilling to give athletes even an inch on this front that the public – who watched TV contracts and inflated coaching salaries – got fed up. Retiring from the NCAA has become the easiest possible win for state legislators.

When California became the first state to pass such a law, the NCAA issued a press release. She claimed that schools would adjust NCAA rules accordingly so that further state involvement would be unnecessary. As it happens in nearly all NCAA stories, the Blue Ribbon Committee was formed of athletic directors and other administrators. That committee met. Its members take their responsibility very seriously. But nothing comes from their work. In the end, Emmert’s NCAA chased after the NIL rules and allowed a raft of state laws to go into effect.

While all of that went on, a pandemic swept the world. The NCAA quickly canceled its championships in the spring of 2020. But that summer brought fighting between conferences over what to do in the fall. In August 2020, when the Big Ten and Pac-12 postponed their seasons indefinitely while the ACC, Big 12 and SEC progressed, it became crystal clear. Nobody was responsible. Either because the NCAA’s bloated structure made it impossible to drive or because he didn’t want to drive, Emmert waived. But he kept cashing checks.

Suddenly, between the rapidly changing landscape of the NIL and schools’ fear of making new rules or imposing existing ones so they wouldn’t be dragged into federal court, college sports faced the most transformative time in its history. Strong leadership was more important than ever. In April 2021, as if trying to prove that it hadn’t cared for the past 10 years, the NCAA Board of Governors — a group of college presidents and other leaders — extended Emmert’s contract until 2025. That error was corrected Tuesday.

Now more than ever, college sports need a visionary leader who is capable of imagination, resilience, and a willingness to push schools to make meaningful changes. If this passage sounds familiar, it should. You read it at the beginning of this column. The only difference is that all references to the NCAA have been removed. Because in the wreckage left behind by him after the Emmert period, an entirely new governing body might be for the best of all involved.