In the Eagles chat on Tuesday, there were a lot of questions we couldn’t get to in time or other questions we answered but we could use more color. And so, let’s post a mailbag to answer some overflowing questions, as well as some FAQs on Twitter and via email.

Question from JohnA: I’m concerned that Jordan Davis hasn’t shown enough (or may not have been given the opportunity to show enough in Georgia) to be taken at age 15. If it’s such a rhino why isn’t it used, or showing up more in the stats? One analyst said it was “strong, but not strong…”

To start, Davis was the winner of the Chuck Bednarik Award, which is awarded to the best defensive player in college football, as voted on by members of Maxwell Football Club. He also finished in the top 10 in the Heisman vote. So it’s not like he wasn’t a star in college. If you watched the Georgia games last year, he attended!

As for the “strong but not strong” comment, this is from Greg Cosell, which I respect a lot.

I will respectfully disagree. When Davis was making a two-gap and playing missions within the Georgia layout, he wasn’t trying to move the opposing offensive line’s men. He would stand on them, usually getting rid of their lumps easily. I think that’s what Greg was talking about when he said that Davis is strong and can own small areas of the field. However, when he wanted to move the attacking men against their will, there are plenty of examples of him doing that as well, as shown here:

It is very strong.

Question from Bird Gang: What is the least option you would accept to trade Andre Dillard and/or Gardner Minshew?

I’ve been saying earlier round four for both players, but I think it’s reasonable not to accept less than three, at least for now. If you are trading Minshew, who is your backup? So it’s better for another team to make it worth your while to give it up.

Then with Dillard, the Eagles have a good enough trading chip there. Want a guy who can start in LT? Give me a choice of day two, or good luck with whatever bad start you want to replace.

Question from Sam Becker: Do Dillard and Minshew qualify for corporate choices if they sign elsewhere next year and how do you estimate that when considering their compensation?

Yes, if Dillard and/or Mincho play their contracts at Philly and leave for another team at free agency outside next season, they will count in the companies’ selection formula. However, in order to have comp picks, you have to lose more players than you gain, and I don’t see that being realistic for this team. They will likely gain more players than they lose, as they did in this off-season.

I think the Eagles should realize that they are very unlikely to get anything for any player, if they don’t trade them. If they are not dealt with by the trade deadline, the price will likely go down if they want to get some value back.

Question from the Office Linebacker: I don’t understand Derek Stingley’s love. The guy seems to have a lot of question marks, especially His desire to play. Did they lean on something from Dillard?

People love it because it’s the best pure covering angle in a draft, which goes a long way in forgiving a few imperfections.

But, yes, his accidental indifference would be more worrying to me than the injury history. In fairness, LSU was one of the best college football teams of all-time in 2019. They went 15-0 and had only three close matches all season against a stacked schedule. The following year, after losing half their team in the draft, they went 5-5 in a season that COVID made less fun. I can kind of understand why Stingley wasn’t in this season like the previous one.

Keep in mind that this kid is still only 20 years old. He was a teenager for most of his college career. I think sometimes we expect these kids to be more mature than is reasonable. Go back to when I was a teenager, and…sorry.

So anyone who is interested in him will determine how much he loves football. And you’re right – if there are major concerns out there, they should do a better job of identifying that than they did with Dillard.

Question from Hinkie: Do you think this QB project is undervalued? I’m no recruiting expert and I don’t feel as if in years past there have been studs on top (remember the Winston-Mariota hype) but I do feel there are some pretty curious guys out there. I can see a world where Wales owner, Matt Corral, Sam Howell and Kenny Beckett are all off to a very good start. They all have concerns (who wouldn’t?) but that seems kind of an exaggeration for the thirsty QB league?

It’s a bad class, in my opinion. I think Mac Jones, the fifth quarterback last year, would have come out higher than all of those players this year. I’m definitely with you that doesn’t mean that none of them won’t hit.

Question from Justin: If the Eagles get an LB in rounds 2 or 3, who do you prefer?

Hmmm question: How do you arrange the three days of the draft according to your preference?

(Voice of Abe Simpson) Day 3 reminds me the most of what the draft was, when they streamed it on TV all day on Saturday (Rounds 1-3) and Sunday (Rounds 4-7). I always get that money win, but I kind of hate that they took it to prime time.

Question from RKotite: So every year you put together a huge list of players to track in the draft and cross them off once they’ve been selected. Have you ever done an analysis to see how many/what percentage you got right as far as the round you thought you would enter?

Last year was a respectable year. I had six men on my list. Here is where they are:

Question from a cautious optimist: I support Matt Ariza’s formulation. If the Eagles offense will fail to convert the easy third defeats, we at least benefit from watching a fun gambler.

It would be weird for any fan base crafting Araiza, as they would be pissed off about a kick, but would still watch it rather than break into the bathroom.

Question from MichaelP: I heard you say on the podcast that the draft was deep, and it seemed like you were going to explain why, but then Brandon started talking about something else, and you never got back to it. I was interested to hear an explanation of why.

The 2020 college football season was cut short due to COVID, so a lot of players who would normally be out after a full season chose to stay in school instead of announcing the 2021 NFL Draft. The NCAA also awarded an additional year of eligibility as a result of COVID. As such, 2021 had a particularly weak year on Day Three and during the unwritten free agency portion of the draft.

Question from Pete: I was curious if you’ve ever looked at an article that follows your final mock draft detailing who was available and your thought process for choosing a particular player over another. Basically a big Jimmy Kempsky painting.

I’m going to have my only full 1st round model photo on Thursday that I kind of worked on before the last mock-only version of the Eagles, which I posted on Monday. It will show how you got to Jordan Davis on 15 and Treylon Burks on 18.

Question from Mark: Hi Jimmy, I read the chat from today and saw you acknowledge that The Streak is still alive. However, this screenshot from PhillyVoice shows that there is no entry on April 11th. When I saw it a few weeks ago, I thought to myself, “And on the tenth and tenth day of the tenth, Jimmy rested.” Strike Jet? Please address in your mailbag. Your fans want to know. 🙂

For those of you who have no idea what Mark is talking about, I’ve been posting new content every day at PhillyVoice every day for over two and a half years. More specifically, the last day I didn’t post anything to PhillyVoice, was August 28, 2019, the day after my father passed away. In fact, today is the 973rd day in a row that I am posting something here.

I applaud the readers for trying to keep me honest. I certainly would not respect another writer who makes such a claim if it is incorrect. In this case, Mark has included a screenshot showing my author page and the article he sees missing on April 11th. 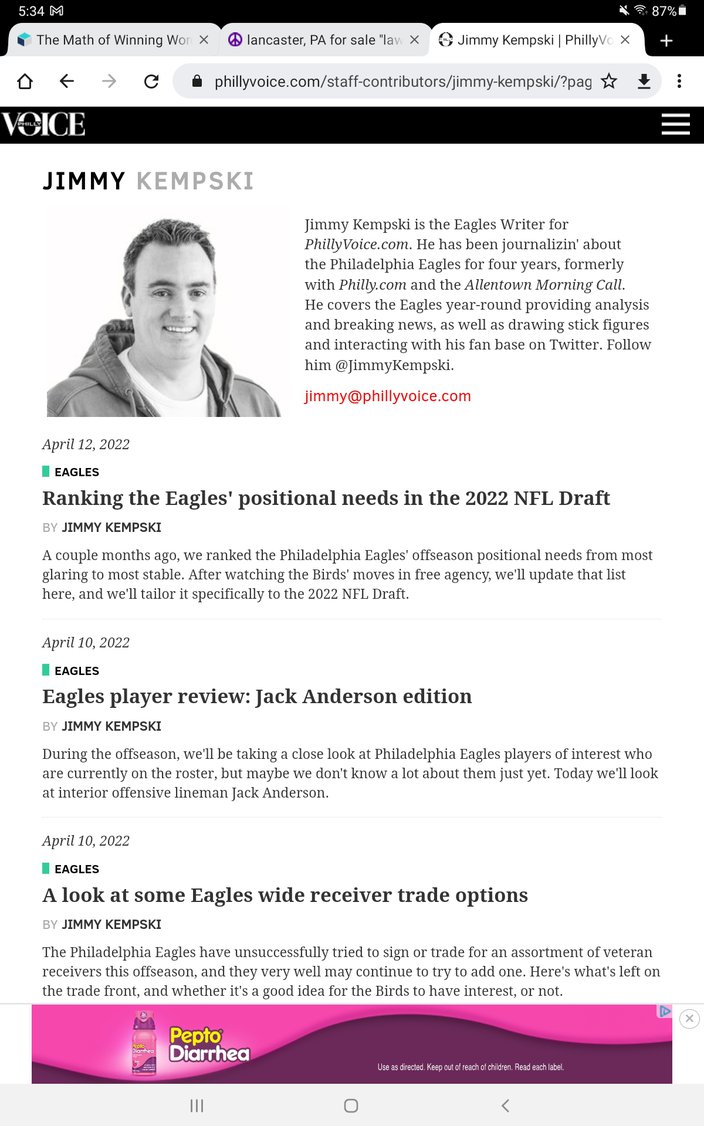 First of all, let me first say that I hope you have found the lawn mower of your dreams, and that your diarrhea has subsided. 😜

For April 11th, I posted the article you see in the list above titled “A Look at Some of Eagles Wide Receiver Trading Options.” Posted at 5:30 a.m. on April 11, as noted in the review log on our publishing software: 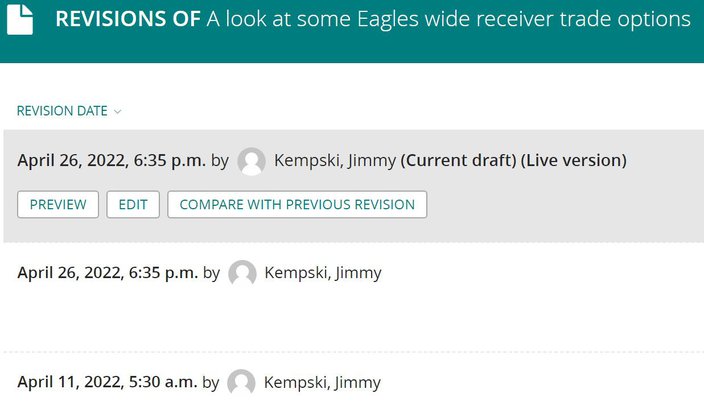 I have since corrected the date to show April 11, as mentioned in the August 26 notation in the editorial log.

As you can see, I tweeted the article a minute after it was posted on April 11th, at 5:31 AM

If you look at the comments section of that article, you won’t find any comments from April 10, so why does the article say April 10? Well, when I sit down to write and hit New Article in our publishing software, whatever day it is, that’s the date this article will say in the article, unless you change it manually. I wrote this article on April 10, and submitted it to our sports editors, Evan Macy and Shamus Clancy, so they can include links and other stories on our site.

I got up early on April 11th, posted that bad boy on the wrong date, and went to enjoy my day. Shamus came up with adding links and so on at 9:02 AM on April 11, when he asked me to “open” the article so he could get in. 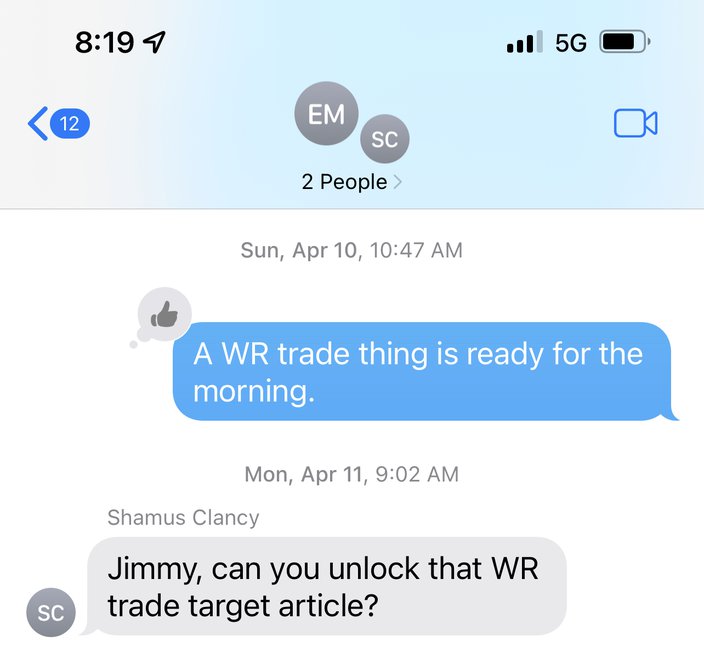 As our regular commenters can attest, this is definitely not the first time I’ve gotten a wrong date for an article. It’s very common, although someone usually catches my eye at some point and I’ll fix it. This one just fell through the cracks.

But surely, as the evidence above emphatically shows, I did post an article on April 11th, and I’m looking forward to celebrating my 1000th straight day with all of you on May 24th. In conclusion, for the haters: